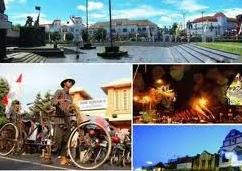 During the independence war of Indonesia, Yogyakarta played a major role in contributing the process of the independence. Many national heroes who were born in Yogyakarta, like Ki Hajar Dewantara, KH.Ahmad Dahlan, Sri Sultan Hamengkubuwono IX and many more, gave major contribution to the nation. There are many important events happened in Yogyakarta, one of them is 1st March Attack in 1949. Yogyakarta also used to be capital city of Indonesia during 1946-1949. In Addition, the city has been renowned as Education City since many students from all around Indonesia and even aboard, come here to study.

As the center of culture and art, Yogyakarta offers many accesses to experience Javanese culture through art performance, like classical dances, puppet shows, and many others/traditional values and Javanese Culture are well upholdas the basic capital in developing the city to face the future, especially to be one of the main tourist destination in Indonesia.

Related For About Yogyakarta