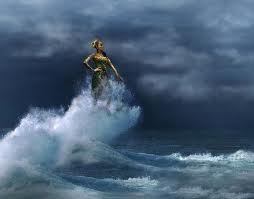 Located about 35 km to the south of Yogyakarta city, Parangtritis Beach has long been famous, not only as a beach resort, but also as a historical place closely linked to the mysterious legend of the Queen of the South Sea, “Kanjeng Ratu Kidul”. Together with her confidant, the feared Nyai or Nyi Roro Kidul, the ever youthful and beautiful queen, Kanjeng Ratu Kidul reigns over sea-nymphs and spirits.
The legend of Nyi Roro Kidul herself is very popular, thought to be a legendary Javanese goddess. Her identity is of a complex goddess named goddess or queen of the Southern Sea of Java (Indian Ocean or Samudra Kidul) in Javanese and Sundanese mythology. Other names include Ratu Laut Selatan (“Queen of the South Sea,” meaning the Indian Ocean) and Gusti Kangjeng Ratu Kidul.
Parangtritis is the Queen of South Kanjeng meeting with the people he wants. Even according to local superstition, they were dressed in green, the color of joy Kanjeng Queen of South, will be taken by the South Seas to live in the kingdom of the South Seas.
According to legend, Queen of South Kanjeng marry one of the king of Mataram, Panembahan Senopati. Thanks to the close historical relationship with Kraton Jogja, until now, on certain days, called Suro in the Javanese calendar, often made harbor in honor of Nyai Roro Kidul and Kanjeng Queen of South – either by Kraton Jogja and the surrounding communities. In addition to the legend of the Queen of South Kanjeng, Nyai Roro Kidul itself even has her own story.
Want to meet with Nyi Roro Kidul? Try and meditate day and night in Parangtritis, as has been suggested by the community. But no one too if you are into Parangtritis just for recreation